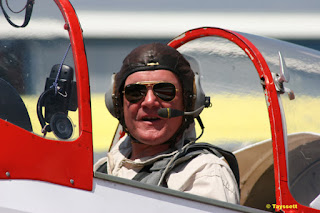 by Elliott Marsh | Nov 15, 2015 | Airshows, Aviation News, Feature, Warbirds
It is with great sadness that we learned of the death of Marc Mathis on 14 November 2015. Elliott Marsh remembers one of the towering personalities of the European airshow circuit.
Marc ‘Léon’ Mathis was killed flying the HKW-01 ultralight near Alsace on 14 November 2015. He had carried out the flight testing of HKW-Aero’s light aircraft design and was involved in the development of the HW-01’s two-seater variant. A former airline pilot with more than 20,000 hours in his logbook, Marc was well-known in airshow circles for his distinctive style of demonstrating Second World War fighter aircraft.

“Where Angels Play”, Soaring high into the blue against a stormy backdrop with the P-40N alongside, Hahnweide 2011. © Huw Hopkins – Global Aviation Resource
Marc was prolific across European airshows for decades, most recently flying the AJBS P-51D Mustang ‘Nooky Booky IV’, MeierMotors’ TF-51D Mustang, Christian Amara’s P-40N Warhawk or any one of several Yak-3 and -11 variants. You could always tell when Marc was at the controls of one of these potent warbirds. Tearing up the skies in these piston fighters, his routines had an almost animalistic quality about them, the perfect juxtaposition of aggression and grace.
His solo displays – usually beginning with a roll into the first pass from high altitude – were all about speed, energy and crisp aerobatics. Trademark manoeuvres included multiple consecutive aileron rolls (as many as five in the Yaks) and big, energy trading vertical figures executed with Gallic flair and precision.

Piling on the speed at the controls of the TF-51 Mustang, pre-‘Legends 2015. © Huw Hopkins – Global Aviation Resource

Getting airborne in the P-40N at Flying Legends 2013. © Huw Hopkins – Global Aviation Resource
In the tail-chase environment, he brought tremendous energy that electrified many a warbird set-piece. Few who’ve attended Flying Legends will forget his fast, low runs in the Warhawk or Mustang, always a highlight of the show. A little over four months ago I remember him dipping beneath the horizon in the German TF-51, almost head-on with the stationary ‘Sally B’ holding at the end of the runway, before pulling up and into the near vertical to reposition for his next pass – another grass cutting run down the entire length of the runway from left to right. Stirring stuff.
In the FlugWerk FW-190s, Marc found his perfect match, the Frenchman somewhat ironically looking every inch the stoic German aviator at the controls of the radial engine beast. In the FW-190s owned by Christophe Jacquard and Jerry Yagen, he wowed crowds at La Ferte Alais, Hahnweide, Flying Legends and other European airshows; ‘Legends being the former example’s sole UK appearance and one which is remembered as one of the event’s all-time highlights.

Stealing the show at Flying Legends 2009 as the Spitfires dance beyond. © Huw Hopkins – Global Aviation Resource

Absolutely looking the part at the controls of the FW-190. © Huw Hopkins – Global Aviation Resource
Alongside Brian Smith in Spitfire Limited’s Hispano Buchón, and with a supporting cast of seven tail-chasing Spitfires providing the backdrop, Marc and co. delivered a positively awesome, classic ‘Legends opener, one of the most genuinely exciting airshow moments of recent years that had many on Duxford’s Western ‘tank bank’ whooping and cheering to an extent not seen before or since.
That particular aircraft was lost near Hyéres on the South coast of France on 12 June 2010, with Marc at the controls. In a terrific feat of airmanship, he was able to ditch the aircraft a short distance offshore at a not inconsiderable speed (sources indicate that Marc himself claimed a landing speed of 200km/h) without bringing himself to harm.

The FW-190, a real brute of an aircraft. © Huw Hopkins – Global Aviation Resource

A somewhat unconventional attire for a flying display here, spotted at Flying Legends 2013. © Huw Hopkins – Global Aviation Resource
As a testament to his character, the then 63-year old Mathis is alleged to have refused assistance from jet-skiers upon evacuating the aircraft, and swam safely to shore. It was one of more than ten crash or forced landings he had walked away from.
Whilst he’ll be remembered by many for his impressive warbird outings, Marc showed exemplary aerobatic skills whilst flying the Zlin 526, his command of the aircraft at very low-level being particularly impressive. By contrast, he also displayed the AJBS Junkers Ju-52 on occasion, including leading a scintillating close formation duo with a second JuAir machine at LFA 2013. Suffice to say, Marc could always be relied upon to provide a terrific account of his mount – his gift was apparent regardless of the aircraft he was flying.

Beating up Hahnweide on departure, September 2013. © Huw Hopkins – Global Aviation Resource
Landing the radial Yak at Hahnweide as the sun sets, September 2013. © Huw Hopkins – Global Aviation Resource
At the time of his death, Marc had accumulated more than 22,000 flying hours.  His aviation career took him from small French flying clubs to the African bush; from the cockpit of light aeroplanes to the DC-10, which he captained for Air Liberté, and from displaying the Zlin 526 to the mighty FW-190 in his inimitable style.
With Marc Mathis’ death, the European airshow circuit has lost one of its towering personalities. He rendered a distinguished service to the aviation scene; a terrific aviator with a truly unique presence and charisma that belied the warmth and openness his friends and family will remember him for, his absence will be deeply felt by the many he touched with his exuberant fling displays over the years. 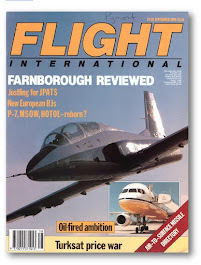